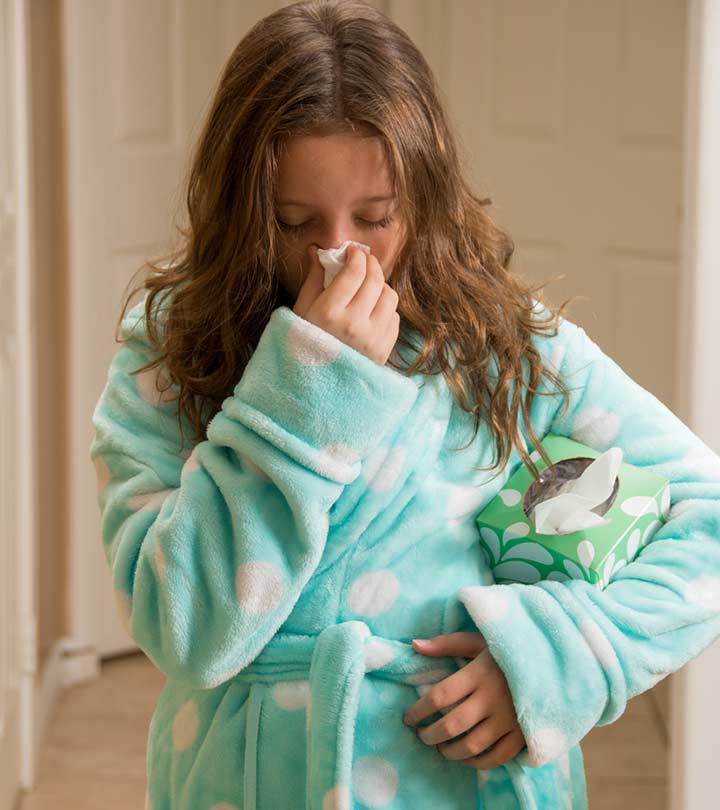 A stuffy nose is normal among children when they have common flu or rhinitis. Contrary to what is believed, a stuffy nose is not because of the excess mucus blocking the nose but instead due to inflammation of blood vessels in the nose (1).

Although easily curable, a runny or stuffy nose hinders the day-to-day activities of a child. The blocked nose could make breathing difficult, which may make the child feel lethargic and irritable throughout the day. At times, persistent congestion may lead to ear canal and upper respiratory tract infections.

There are many ways to treat a stuffy nose in children. Read more about these measures and the causes behind them.

Causes Of Stuffy Nose In Children

A runny or stuffy nose in children could be due to various reasons. While some could have a benign cause, others may indicate underlying illnesses or conditions. These causes could include the following (2)(3).

In rare cases, abnormality in the shape of the nasal septum could cause a blocked nose.

Symptoms Of Stuffy Nose In Children

A stuffy nose is in itself a symptom of flu or rhinitis. In addition, as the nasal passages are inflamed and blocked, other symptoms of upper respiratory tract infections may also occur. Symptoms related to an ear infection may also be observed. These other accompanying symptoms may include (2)(4)(5):

Treatment For Stuffy Nose In Children

There are many methods to treat stuffy noses in children, ranging from simple home remedies to medications. The following treatments could relieve your child from stuffy nose (6).

Mild nasal congestion usually lasts for a few days. Home remedies are effective in relieving a child from any discomfort. However, if the congestion lasts for more than a week, then your healthcare provider may prescribe medications accordingly.

Medicine For Stuffy Nose In Children

Over-the-counter cold medicines may be effective on adults but not on children. Hence reach out to a pediatrician about the type of medication suitable for your child’s stuffy or runny nose. Furthermore, your healthcare provider would analyze the underlying cause of persistent congestion and prescribe medications accordingly. The most common medicines to treat stuffy nose in children are (2):

Children have developing immunity, and this makes them susceptible to common colds and allergies. You may consider the following interventions on the first signs of stuffy nose to prevent it from worsening (2)(6).

A stuffy nose in children is nothing to panic about as it goes away in a week. But if it is accompanied by a sore throat, fever, or any other symptom, it is advisable to consult your healthcare provider. In such cases, congestion would be treated by acting on the underlying cause with suitable medications.

Sindusha is a clinical nutritionist with over two years of experience in diverse fields of nutrition. She did her Masters in Food Science and Nutrition and has qualified UGC-NET. She interned as a quality control analyst and as a dietitian during her graduation. She was a part of several community nutrition projects and a phytochemical-based nutrition study during the same… more