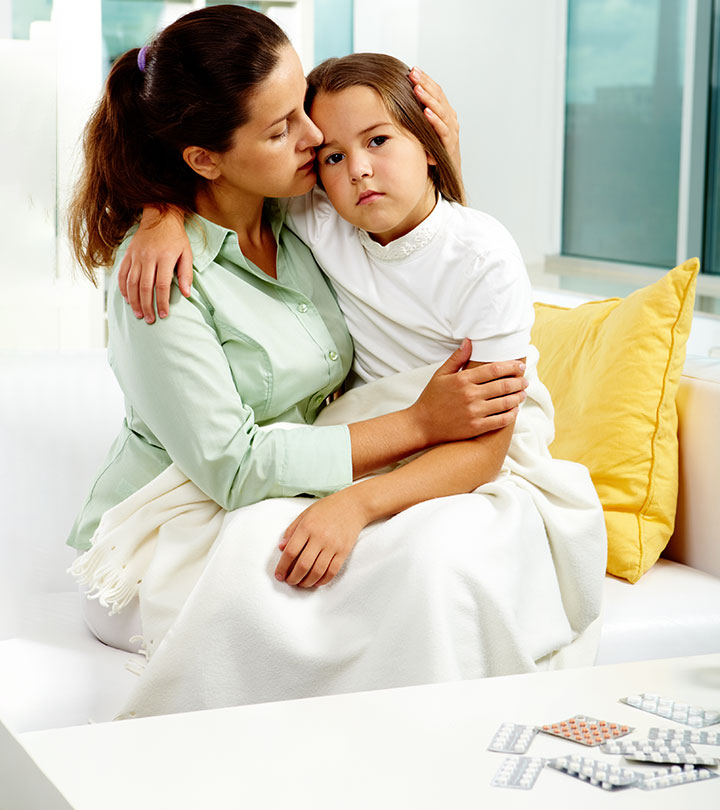 Anxiety is a normal defensive mechanism of the human body to protect us from dangers. Anxiety disorders occur due to an altered perception of and response to fear and stress. This instills the urge to escape and avoid such situations to the extent that it impairs day-to-day functioning (1).

Anxiety is a common psychological disorder in children but, if left untreated, may persist to adulthood. This post talks about anxiety medication for children, their safe use, and side effects.

Some fears and worries, such as thoughts of being separated from their parents, are typical in young children. They usually outgrow these fears as they grow older. If they persist and start interfering with their daily activities at home or school, it is a concern and requires medical attention. The types of anxiety disorders include (2):

Age At Which Children May Take Anxiety Medications

Research shows that anti-anxiety medications work better in children aged seven years or older when used with psychotherapy (3). Anti-anxiety medication should only be given when prescribed by a doctor. The American Academy of Child and Adolescent Psychiatry (AACAP) recommends behavioral therapy as the first-line treatment for childhood anxiety with mild symptoms. Moderate to severe intensity anxiety disorder may need medications (4).

Medications that benefit anxiety were initially used to treat depressive disorders and were classified under antidepressants. All medications used for anxiety are not approved by the US Food and Drug Administration (FDA) but are prescribed “off-label” by many practitioners and are considered safe and effective.

Drugs of the class selective serotonin reuptake inhibitor (SSRI) and serotonin-norepinephrine reuptake inhibitors (SNRI) are preferably used to treat general anxiety disorder in children. Duloxetine (an SNRI) is the only FDA-approved medication for childhood anxiety disorders (5). Other drugs, such as tricyclic antidepressants (TCAs) and benzodiazepines, are less common choices for children (6).

The table below elaborates the various drugs used to treat childhood anxiety (3).

Usually, the medications are started at the lowest dose and gradually increased based on how the child responds to it and the side effects. The child may show improvement after two to four weeks, and the best treatment dose is often identified over 8-12 weeks.

The dosing of anti-anxiety medications in children shall be decided by the doctor depending on age, body weight, and medications already used by the child. Some additional considerations regarding medications for anxiety include (3):

Side Effects Of Anxiety Medicines For Children

Anti-anxiety medications work by modulating the effects of various neurotransmitters, such as serotonin, noradrenaline, or histamine, in the central nervous system and are not free of side effects. Some common adverse effects of these drugs include (7):

Serious side effects that require immediate medical attention are (3):

The FDA directs all manufacturers to add a boxed warning statement and extended warning statements to alert users to an increased risk of suicidality (suicidal thinking and behavior) in children and adolescents being treated with antidepressant medications (8). A rare adverse effect, serotonin syndrome (excess serotonin in the body), may be caused by SSRIs, SNRIs, or TCAs, resulting in agitated mental states with hallucinations or coma, muscle rigidity, seizures, flushing, and changes in heart rate and blood pressure (9).

Below are the general precautions to be exercised while giving your child medications for anxiety.

According to the Centers for Disease Control and Prevention (CDC), anxiety affects about seven percent of children between the ages of three and seventeen years in the US (10). The AACAP recommends psychological therapies such as cognitive-behavioral therapy (CBT) as the first treatment approach for anxiety disorders in children. Medications should be used as a second measure or an adjunct to CBT for the maximum benefit of your child (4). Timely interventions through treatment could help avoid complications and persistence of anxiety into adulthood.

Dr. Joyani Das is a PhD in Pharmacology with over two years of experience in academics. Previously, she worked as an associate professor, faculty of Pharmacology. With her research background in preclinical studies and a zeal for scientific writing, she joined MomJunction as a health writer. Her research work was published in international journals and publications, such as Elsevier, Current… more