You know who you are — shouting over the rest of us, calling out players by name and number, critiquing, criticizing, badgering — can you all just cool it?

I’m not saying don’t support the team. Please, come to every game. Cheer your heart out. Wear the colors! Sing the fight song! But for the love of sports, stop trying to coach the kids from your seat on the 50 yard line.

I am sure from that vantage point, you can easily see what each player is doing wrong and exactly which plays should have been called. But do us all a favor, and keep it to yourself.

Sideline coaching is not helpful to anyone

For one thing, your sideline coaching is completely unhelpful. I mean, let’s hope that no high school athlete would ignore his coaches and change the way he is playing because he thinks some 40-year-old guy in the stands or a mom with a megaphone knows better.

If you think you are telling a player the right way to tackle or block or go for a fumble, don’t bother. I can assure you, he knows. That is why he has been going to every single practice. These kids do not — I repeat — do not need you to tell them how to play the game and neither do the coaches.

You screaming at a player to “C’mon, play some football” is not going to change the course of the game. In fact, it’s self-indulgent at best. And, at worst it is a distraction and an insult. Do you actually think there is even the slightest chance that boys who gave up their summer to sweat it out on the field, who practice in the heat and the cold, who endure physical pain and emotional stress don’t want to win?

Do you really think they are behind because they would be just as happy if the game went the other way? Do you think that belittling their effort is the key to victory? Because I am telling you…It. Is. Not. 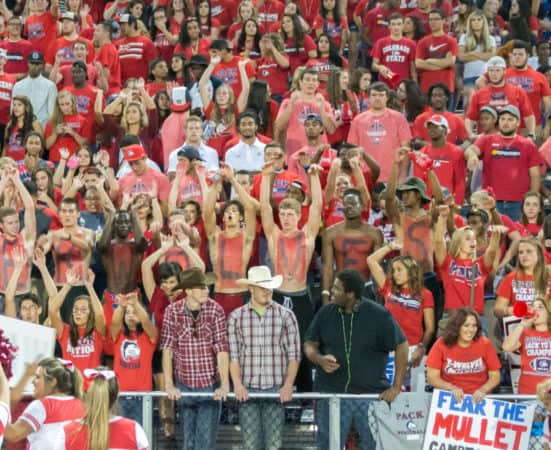 Stop yelling at the athletes, it’s not helping. (@rjamartinez via Twenty20)

Another thing, if you know so much about what’s happening, maybe take a look around. That kid you just yelled at for not “having his head in the game” is someone’s son. His grandparents might be there or younger siblings. And they all know what you don’t. That boy eats, sleeps, and breathes football.

To be clear, I’m not saying don’t yell. Yell to encourage our kids or to show frustration at a bad call or failed attempt. But do not tell those boys how to play. And stop calling their motivation into question. Keep your mouth shut when they make a mistake. They know it, they feel it and it’s devastating for them.

Don’t get me wrong. I don’t think that having fun is all that matters. These kids and their families invest too much into their sport not to care about the outcome. I want to win. The boys want to win. The whole town wants to win. But you, with your ranting and raving and sideline coaching will not influence the outcome — except to make a tough loss even tougher.

Thanks for coming to my pep talk and go team!

The author of this post wishes to be anonymous.

For The Average Young Athlete, Sports Isn’t A Free Ride To College