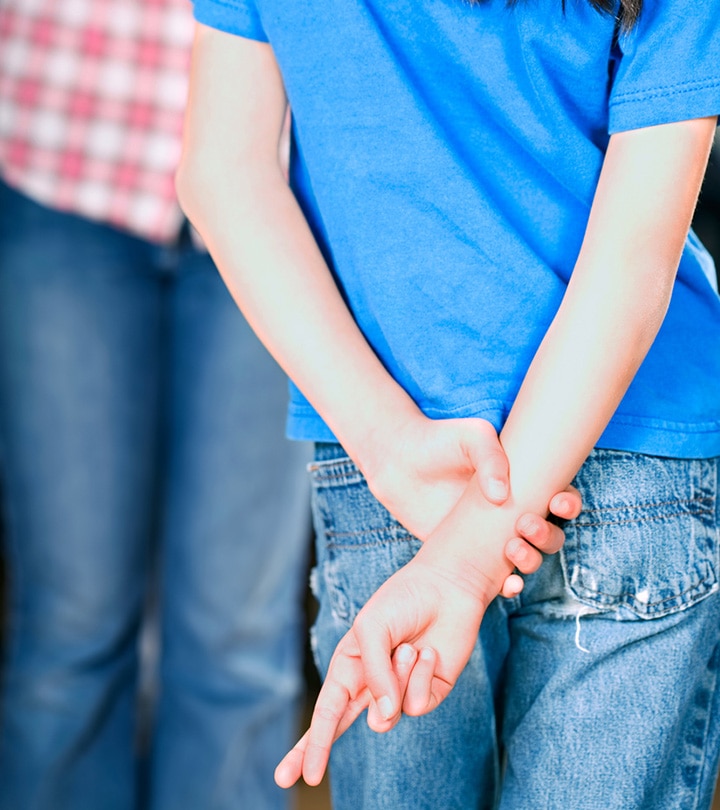 Parents often become worried when their children start lying. This behavioral change may raise questions about how well the values of honesty, trust, and responsibility are being taught. However, according to the American Academy of Child and Adolescent Psychiatry, lying is not a serious problem and may occur when children want to avoid a task, protect their privacy, or gain attention (1).

Children often become good at telling imaginary tales by the age of four or five. This new skill should not be taken as a step toward lying but as a developmental milestone (1)(2). Nevertheless, habitual lying may indicate underlying concerns.

Read the post to learn about when kids start lying, the reasons for the behavior, and how to stop kids from lying.

When Do Children Start Lying?

Children mostly start lying by the age of three, before which they do not lie because they cannot completely understand what they say.

Why Do Children Lie?

Understanding why children lie is important for devising effective strategies to control this behavior. Some reasons for lying are (5)

Children go through developmental changes and discover various behavioral aspects at different ages. So, like every newly acquired behavior, they test their ability to lie and see what circumstances it leads to.

Children who lack self-esteem and confidence may often tell exaggerated stories about themselves and their situations. It helps them stand out and feel important, thus gaining attention and approval.

When children understand that their actions might cause trouble, they may try to avoid it by lying. On some occasions, they may even lie if parents set unrealistic expectations that they cannot meet. For example, many children lie when their grades are not on par with their parents’ expectations (1)(3).

As children grow up, they learn that telling a white lie can be a social skill that helps avoid hurting people’s feelings. Thus, they acquire the habit of lying to make the people around them happy.

How Can You Stop Children From Lying?

Once children understand that lying is not appropriate behavior, take small steps to help them end this habit. The following are some ways to stop children from lying (3)(5)(6)(7):

Parents play a huge role in defining the personality of their children. So, if your child engages in lying, discuss these aspects with them (1):

If your child has been lying, discuss it with them, allow them to display positive behaviors, and reward them for their efforts. Rewards will most likely encourage them to repeat their good behavior and stop lying (8).

3. Avoid situations that allow them to lie

Many times, children lie to avoid consequences. Hence, ensure you do not create such situations where children feel the need to lie. Instead, think of the reason behind the lie and find a solution for it. For example, if a child makes a mistake, discuss the problem and find a solution together instead of punishing them.

4. Encourage them to own up to their mistakes

Children often lie because they are scared of owning up to their mistakes. A great way to encourage truthfulness is by praising the child for being courageous and accepting their mistakes.

Children follow examples, so they will acquire the habit if they notice you lying to get things done. A good way to teach them not to lie is by modeling honesty yourself.

Children may lie because they lack confidence, self-esteem, or problem-solving skills. Find out what they lack and help them build those skills. For example, if the child lies about incomplete homework, find out why it is incomplete and solve the problem instead of punishing them.

7. Reinforce the importance of being truthful

Children between ages four and five understand that lying is not a positive behavior. Therefore, guide them in different ways, such as by reading a book about honesty and giving examples of how situations can be dealt with differently. It will give them the idea that being truthful is rewarding.

8. Help them realize the consequences

Labeling the child as a liar can hurt their dignity and self-esteem. Therefore, even if your child lies regularly, discuss the problem by pointing out the facts and reasons rather than punishing or labeling them.

Sometimes, children may lie about serious issues, such as abuse, or indulge in risky behaviors, such as alcoholism. Be aware of such situations and reassure them of being safe. Let them feel that you will be able to find a solution to any issue that might arise.

11. Be mild while reprimanding

If your child lies by creating imaginary stories, be mild in how you point this out and correct them. Tell them that you would prefer the real story instead of a made-up one.

If the child has fought with a friend, ask them to write an apology letter instead of severe punishment.

12. Give them truth checks

If you know that your child is lying, tell them you would appreciate the truth. Give them some time to make up their mind, and assure them that you will understand their problem. Giving them time and assurance will make them feel safe and encourage them to be truthful.

13. Remind them that you love them

Children often lie because they fear their bad behavior or mistakes will decrease their parents’ love toward them. Hence, talk to your child and encourage them to share their feelings with you without fearing it might affect your relationship.

14. Give extra time to children with ADHD

Children with ADHD are impulsive and generally give answers without thinking. For example, when asked whether they have completed their homework, they may immediately say yes even if the homework is incomplete. Hence, parents and teachers should give these children extra reminders to think before they answer.

Children learn a lot when you tell them about your experiences and how you handled a particular situation. Tell your child how you owned up to your mistake instead of lying and how rewarding that experience was. It will encourage children to do the same.

If your child is falling into a regular habit of lying and none of your methods are helping them, consider taking professional help. Family therapy helps parents establish stronger bonds with children. In addition, a therapist may be able to identify an underlying problem you might have missed (2).

How Does Punishment Affect The Habit Of Lying In Children?

Some parents believe that children should be punished for their wrong behavior; however, punishment is not a solution to lying. The following are some ways in which punishment can affect children (9):

Children need to learn the importance of honest behavior, but unjust punishment will never send the correct message. Therefore, it is important to devise effective methods to control the problem. Talk to your child, gain their confidence, and try to understand the reason for their behavior. Helping children sort out their issues and building life skills, such as decision-making and self-management, can enrich their lives.

MomJunction’s articles are written after analyzing the research works of expert authors and institutions. Our references consist of resources established by authorities in their respective fields. You can learn more about the authenticity of the information we present in our editorial policy.The following two tabs change content below.

Pragya Bhargavi has been in the field of content research, writing and editing for over five years. Her passion for academics and science has enabled her to write creative as well as research-based articles. She has completed her Masters in Microbiology and obtained a Bachelor’s degree in Education (B.Ed). As a writer at MomJunction, Pragya aims to bring about a… more