So this happened. I was just finishing making dinner and waiting for my husband to pull in the driveway after picking up our oldest daughter.

My youngest, a high school sophomore, had come home about an hour earlier from the second day of basketball tryouts, and I hadn’t even seen him yet as he was out in the driveway, in his natural habitat, shooting baskets. I looked out the kitchen window and could see his school bag, and his sports bag on the edge of the driveway, atop the snow, and there he was, all 6 feet, 150 pounds of him. 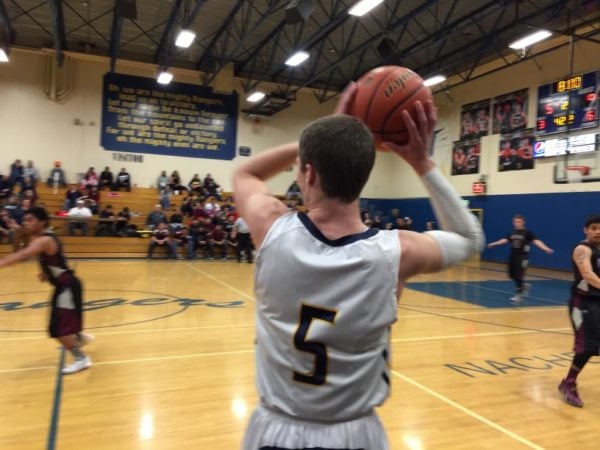 The basketball hoop is my boys’ alter. (Twenty20 @CarlaRodriguez)

Basketball was everything to my son

I then glanced back out a few minutes later, and there was our 8-year-old neighbor and his sister out taking shots. Dribble. dribble. shoot. My son was taking turns lifting each one up so they could touch the rim, score, and do the celebration run and fist bumps down the driveway.

I love watching them out the window.

The basketball hoop was installed the day we moved into our house, right along with unpacking boxes.

The basketball hoop is my boys’ altar.

Most conversations, arguments, and anything else that my boys talk about take place with the basketball hoop as a backdrop. The hoop has an adjustable height so on any given day, someone changes the height to practice the ultimate dunk. We all knew where the lever was to raise or lower the hoop. All hours of the day and night someone was practicing, dribble..dribble…shoot…We installed a special spotlight so even on the coldest, darkest nights the hoop was ready.

I can still hear the bickering about who touched the rim or who scored more points.

I didn’t pick my son up after day two of tryouts because my husband got home from a business trip early and couldn’t wait to surprise him with a ride home. They can talk the talk because they both have walked the walk. I do my best, as a mom, with limited basketball experience, but I do listen to the ESPN top plays most mornings to be current.

I had just gotten the two-minute download from my husband, about the details of the tryout, so I had the scoop on what I should expect when he comes in the door with frozen hands and cold feet. My husband told me, that he thought it went great. Day two, was a 9 out of 10. Day 1, was only a 7 out of 10, so I proceeded to make the usual post-practice snack…peanut butter toast and chocolate milk.

My son was cut from the team

This same kid who had come in smiling just an hour earlier got the text. “Mom, I didn’t make it. I got cut.” He said.

As I continued preparing dinner, I could see that he was holding back tears. Here’s this 6-foot kid standing in front of me, and all I can do is picture him as a toddler with his Little Tykes hoop. Then I fast-forwarded to him practicing free throws with the hand-drawn free throw line chalked on the driveway, and my sitting on the bleachers cheering him on at every game.

All I wanted to do was to take the pain away. He did his best at those tryouts. He’d done camps in the summer. He’s played before. How could he get cut?

My mind replayed all those moments of yelling for him to come in for dinner, and his response always, “Just a minute mom, I have to keep practicing.” As a parent, you do your best to try and make a “life lesson” out of these moments. But life lessons at 15 when you have the life experiences to back them up are difficult to process.

I quickly texted my daughter who was minutes away from pulling in with my husband. She knew that her brother was in the midst of tryouts. I heard him make his way upstairs so I went upstairs knocked, and opened the door. He was sitting on the edge of his bed, his hands over his eyes.

We’ve all been there, right? The moments when you don’t have the right words, so you just hug him. Most of his friends made the team, and he won’t be part of the after-school study group, or the practices, or the games. At that moment, you know, his life has pivoted. Will it be the same hanging out with the boys? Will they forget about him?

What happens when you’re forced to change course?

The passion and hard work over the years end with disappointment and, at that moment, you just want to protect your child’s heart. You want to ease their hurt. But we adults know that life is full of disappointments and this assuredly won’t be the last.

I was a college athlete, a competitive swimmer. I made the national team in my teens and then swam in college. My husband was the football, basketball guy. He played two sports in college and never got cut from a team. We were both very fortunate to go through our athletic careers without the words, “NO, you didn’t make it.”

My first instinct was to go into protective mode. The thoughts flew into my head at lightning speed. Are they just picking the kids they know? Maybe I should reach out to the coach.

Sports add so much value because they are an incredible way to learn about teamwork, leadership, grit, and hard work. And some of the greatest lessons happen when you get to deal with rejection, and not making the team.

It’s easy to think about the investment you’ve made personally to support your kid through this whole sports journey and to wonder if it was all wasted. But the best thing we can do is let ourselves and our kids process the information in our own way.

When I saw my son sitting on the edge of his bed, I wanted to have the right words to say, and they just weren’t there. And that’s okay. You want to fill the silence. “Hey, I hear track is awesome. Why don’t you try that?” Honestly, that’s the last thing they want to hear.

Even though I think my son is a good basketball player, the coach who knows more than me about the sport doesn’t think he’s ready. He isn’t playing year-round to improve his skills. We made that choice together and we don’t regret it.

Over their lifetime, our kids are going to hear a lot of no’s. Hopefully, my son will remember this time, as a blip on the radar. And when he finally hears a “yes” he will realize how sweet it is to get that yes. A friend recently told me, “He may be disappointed that he won’t be winning on the court, but he sure is winning in the game of life.” Keep that one in your back pocket so you can pull it out when you need it. And like my daughter always says, “Minor setback. Major comeback.”

A day after the news that he didn’t make the team, he had a group of friends over, and guess where they spend their time? At the altar. Dribble…dribble…shoot!