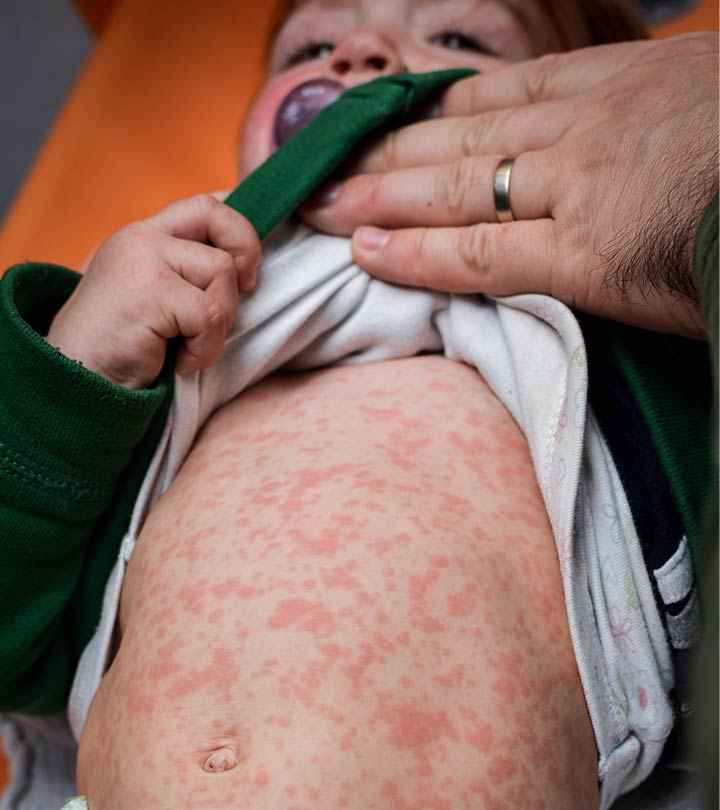 A viral rash or viral exanthem is the inflammation of the skin caused by a viral infection. It may appear as bumps, reddish-pink blotches, pimples, or blisters at one spot (localized) or on the entire body (widespread). Although rare, it may cause itching, stinging, or burning sensation in some individuals.

Read this post as we give you some insights into the different types of viral rash in children, their treatment, and effective prevention.

Types Of Viral Rash In Children

Viral rash in children can be of different types. The type depends on the virus responsible for the infection. Often, children get additional symptoms, such as fever and vomiting, along with the rash.

Here are some of the common viral infections that occur in children and cause a viral rash.

Measles, also known as rubeola or 10-day measles, is a highly contagious viral infection caused by the measles virus belonging to the genus Morbillivirus. The infection spreads from one child to another through direct contact with the infected child’s body fluids, such as nasal and throat discharge, or via airborne droplets when an infected child coughs or sneezes without covering their mouth.

The skin rash caused by the infection usually appears two weeks after the child is exposed to the virus. The rash appears as a deep, red, flat rash and generally spreads from the head or neck to the limbs and lower extremities. The rash begins to clear three to four days after its appearance. Some of the other symptoms and signs that often accompany measles rash include

Since rubeola is a viral infection, the treatment focuses on symptomatic relief by decreasing the severity of the infection. It is best prevented through vaccination.

As the fever subsides, pinkish-red rashes with flat or raised patches or bumps appear on the abdominal region and spread to the face and limbs. The rash isn’t itchy and lessens or disappears after two to three days. Some other symptoms of roseola include

The infection is self-limiting, and the treatment aims at providing symptomatic relief, such as the prescription of acetaminophen for fever. In addition, rest and proper fluid intake help recovery.  Children are most contagious when they have a high fever, and once the fever subsides, the child is no longer contagious even if the rash is present.

Chickenpox is a highly contagious viral infection that commonly affects children between five and nine years of age. It is caused by the varicella-zoster virus (VZV), a form of the herpes virus.

The disease can cause a rash that starts as a small red bump and gradually changes to blisters or spots, and then to open sores, and finally, scabs. The rash appears on the chest, back, and face and spreads to other body parts, including the genitals.

Since the blisters are itchy, children tend to scratch them, which can cause scars after healing. Also, it may raise the risk of skin infections, such as cellulitis. Some other symptoms that a child with chickenpox may manifest are:

Chickenpox may last for up to a week, during which crops of new chickenpox keep appearing. Vaccination is the best way to prevent its occurrence.

HFMD is a highly contagious infection caused by coxsackieviruses from the enterovirus family. It is common in children under five years of age who go to school and day-care facilities. However, it can occur at any age and spread from one person to another through respiratory droplets, contaminated surfaces, and person-to-person contact.

Its common symptoms include fever, mouth sores, sore throat, and rash on the hand, mouth, and face. The rash looks like flat, red spots, sometimes with blisters filled with fluid that turns into scabs once the rash begins healing. Most children have mild symptoms for up to a week to ten days.

Since the disease has no cure, the treatment focuses on symptomatic relief. Further, there’s no vaccine for HFMD. Thus, maintaining good hygiene is the only preventive measure.

Fifth disease (erythema infectiosum) is a common skin rash in children caused by parvovirus B19. Some children with fifth disease can stay asymptomatic, while others may have a mild fever, headache, and runny nose, along with an itchy rash appearing first on the face and then the body. The characteristic red rash that appears on the cheek, known as slapped cheek rash, is the most recognized feature of fifth disease.

Generally, the rash subsides in seven to ten days, but it can reoccur for several weeks. When the rash finally starts to disappear, it may look lacy. The condition is often self-limiting and requires medical intervention only to relieve problematic symptoms, such as fever, joint pain, swelling, and itching.

However, children with weakened immunity and those with blood disorders are at risk of adverse complications. Hence, preventing the disease by following optimum hygiene standards is vital.

Rubella, sometimes referred to as German measles, is a contagious viral infection. Although it is called German measles, it isn’t caused by the measles virus.  Infected children can spread the infection to others one week before and after the appearance of the rash.

Typically, a red rash appears on the face and then gradually spreads to other body parts. These rashes may first appear as raised bumps and then combine and form a stretched rash.

The other symptoms that precede the rash are

These symptoms may occur one to five days before the appearance of the rash. As there’s no known medication to treat rubella, the treatment includes the management of symptoms. MMR (Measles-mumps-rubella) vaccine is the most effective way to prevent its occurrence in children.

How Are Viral Rashes Diagnosed?

A physical examination of the rash and evaluation of other signs and symptoms that appear before and after the rash can help the doctor diagnose a viral rash. Additionally, the doctor will look into the child’s medical history, vaccination records, recent travel history, and if they have come into contact with an infected person.

The doctor may also order other tests, such as blood and imaging tests, to confirm the diagnosis and look for any possible complications of viral rash in children.

Note: A viral rash often looks similar to other types of rashes, and the other symptoms, such as fever and cough, may be present in other illnesses too. Hence, always consult a pediatrician and seek their guidance for the diagnosis and treatment.

Mostly, viral rashes are self-limiting and do not warrant any specific medical treatment. Instead, the treatment is focused on offering symptomatic relief, including reducing the duration and severity of symptoms. For instance, a child may be given a pain-relief medicine, such as acetaminophen, in the case of fever and moderate pain, ointments, creams, or lotions, such as calamine lotion, to soothe itchy rash, and intravenous fluids (IV) and antiviral medications for severe cases of infection.

Note: Do not administer medicines to children without consulting a paediatrician.

Besides these, home care is the most crucial aspect of treating a viral rash. The following steps will ensure that the child recovers from the infection quickly.

Besides these, trim the child’s nails and remind them not to scrub the rash. If the rash feels too itchy, ask them to pat it with a clean, soft cloth or tissue.

How To Prevent A Viral Rash?

Viral infections can be best prevented by following optimum hygiene standards and getting routine vaccination. Also, train them to follow good hygiene practices at home and outside.

As a parent, you, too, need to follow proper personal and environmental hygiene practices as children mimic you.

If the child is infected, keep them at home to prevent the infection from spreading to other children.

A viral rash can happen in most viral infections. Hence, the best way to prevent a viral rash is to avoid infection. While avoiding exposure to viruses isn’t possible, one can minimize the infection risk by taking vaccinations and adhering to optimum personal and environmental hygiene standards.

Despite taking all precautions, if an infection occurs, consult a doctor. A doctor will evaluate the rash and provide insights into the proper treatment and home care measures to help the child recover faster with minimum or no complications.