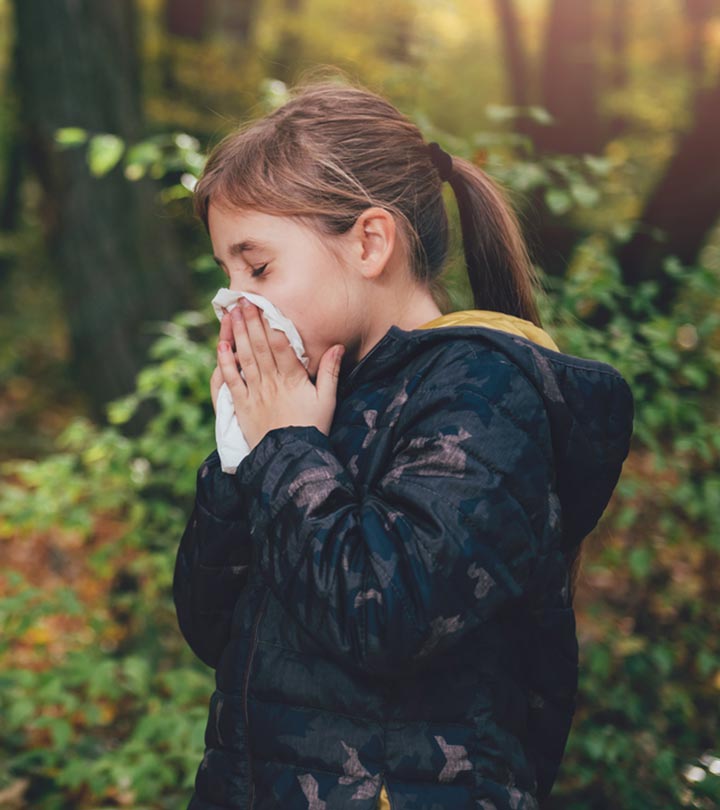 Hay fever, also called allergic rhinitis, is a type of nose inflammation that may occur if your child exposed to certain allergens in the air, such as pollen. It is generally due to the overreaction of the immune system to the allergens.

Hay fever mainly affects the nose. However, it can also affect the eyes, sinuses, ears, and throat in some children. Hay fever affects approximately 30% of children and is common in children with asthma and allergic disorders (1).

Read this post to learn about the signs, causes, risks, complications, diagnosis, treatment, and prevention options for hay fever in children.

Causes Of Hay Fever In Children

Animal dander, dust mites, and mold spores can cause perennial hay fever (throughout the year), while pollen allergies are often seasonal. However, there can be an increased incidence of hay fever due to specific factors in certain seasons (1).

Knowing the cause can help prevent hay fever, and taking precautions and preventive measures in particular seasons can help avoid hay fever in some children. You may seek medical care from an allergist to identify the exact cause of hay fever in your child and plan the treatment.

Signs And Symptoms Of Hay Fever

The following are the common signs and symptoms of hay fever in children (1).

Hay Fever And The Common Cold

The signs and symptoms of hay fever and the common cold are similar and often difficult to distinguish.

Common colds may occur one or three days after exposure to the causative agent and last for three to seven days. In contrast, hay fever symptoms may begin immediately after the exposure to the allergens and last as long the child is exposed.

Although both conditions can cause symptoms such as a runny nose and watery discharge, common colds may cause more thick yellow mucus discharge, body aches, and low-grade fever in children. Hay fever is not associated with fever in children and is also not caused by a virus (2).

Hay fever symptoms may affect a child’s sleep and result in fatigue and tiredness in children. Besides this, the other possible complications associated with hay fever in children include (2)

How To Prevent Hay Fever In Children?

Not all allergies can be prevented. However, you may give preventive medications to your child during peak seasons as per the pediatrician’s recommendations.

Diagnosis Of Hay Fever In Children

The pediatrician may refer the child to allergists, who may do skin tests to identify the cause. Other tests may also be ordered to identify or exclude any other medical conditions in children.

There is no specific cure for hay fever. However, the existing treatments may help improve symptoms and provide relief. Identifying the cause and avoiding or minimizing exposure to allergens is the best way to manage hay fever in children.

The following medications are often prescribed to treat hay fever in children (1).

Over-the-counter medications are not recommended for allergic conditions in children. However, you may consult a pediatrician and get prescription medications based on your child’s symptoms, severity, and health status.

Children with allergies should be evaluated by an allergic specialist. Avoiding the triggering factors can minimize the incidence of hay fever. Seek medical care if your child shows the symptoms since untreated cases can impact their quality of life and often result in complications.

MomJunction’s health articles are written after analyzing various scientific reports and assertions from expert authors and institutions. Our references (citations) consist of resources established by authorities in their respective fields. You can learn more about the authenticity of the information we present in our editorial policy.