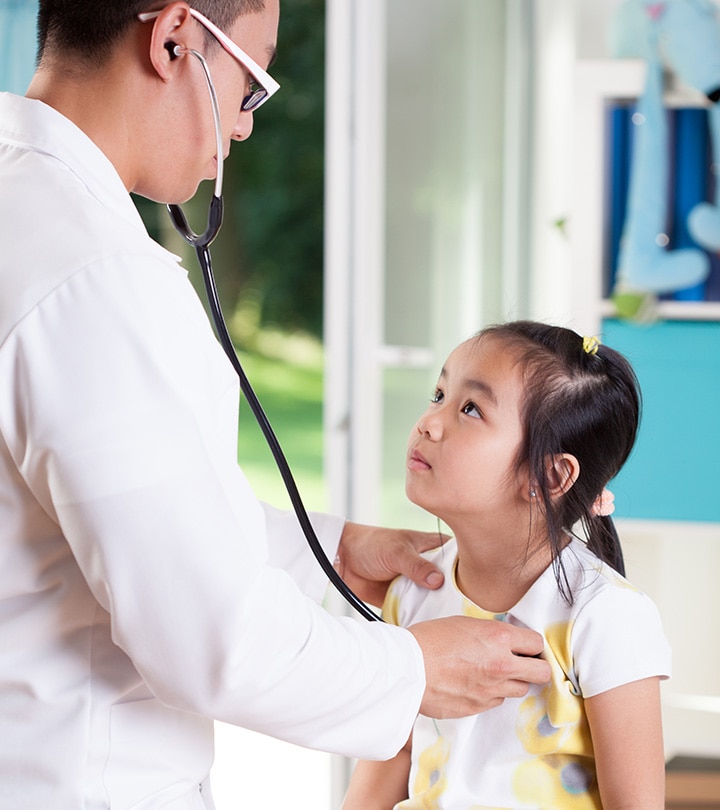 A fever can occur due to various factors, right from a simple weather change to an underlying infection. If your child has a low-grade fever but carries on with their activities with the same usual energy, they could do with some rest. But if other symptoms accompany a low-grade fever, they may require medical intervention.

Learn more about the causes of low-grade fever in children and the signs to look out for in this article.

Causes Of Low-Grade Fever In Children

A low-grade fever could mean that your child’s body is trying to ward off an infection or an underlying disease. The following are some of the common reasons behind a low-grade fever.

2. Urinary tract infections: UTIs could be another potential cause of low-grade fever in your child. It is a bacterial infection anywhere in the kidneys, urethra, ureters, or bladder and is characterized by a stinging sensation during peeing (3).

3. Medicines and vaccines: A low-grade fever could be a side effect of a new medication. Such drug fevers could be due to hypersensitivity towards the medicine. Refer to the label of the medications to check if the new medicine could be the cause (4).

Similarly, vaccinations are followed by an episode of a low-grade fever. A vaccine usually contains small amounts of inactive microbes that trigger the body’s immune system to strengthen the protective response. Therefore, a low-grade fever 24 hours after vaccination is a good sign, as it suggests the vaccine has been effective. Such fevers last a day or two and can be treated with anti-fever medicines (5) (6).

4. Cancer: A persistent low-grade fever for weeks or months could be a symptom of underlying cancers, especially leukemias and lymphomas. A fever is a rare symptom of cancer. If the fever lasts for more than three days, you may alert your medical professional (7).

5. Stress: A low-grade fever caused by psychological stress is called psychogenic fever. According to the American Institute of Stress, family conflicts could be traumatic for children, leading to psychogenic fever (8).

6. Tuberculosis: TB is an airborne contagious disease spread by the bacteria Mycobacterium tuberculosis. A low-grade fever is a common symptom of tuberculosis in children (9).

8. Meningitis: Meninges are thin membranes that enclose the brain and spinal cord. Inflammation of the meninges due to bacterial and viral infections leads to meningitis, which can further trigger low-grade fever in children (11).

Symptoms Of Low-Grade Fever In Children

As low-grade fever has multiple etiological factors, and the symptoms could be specific to the underlying cause. Nevertheless, here are a few of the common symptoms (1).

When To See A Doctor

A child could have a fever ranging between 102°F to 103°F. Sometimes, they may have a fever as high as 103°F and perform their routine activities with regular energy. In such cases, you need not worry much as the fever could subside on its own in a couple of days. However, if any of the following symptoms accompany a fever, visit your healthcare provider (2) (3) (7) (9) (13) (14).

The best way to diagnose a low-grade fever is by measuring the child’s temperature using a thermometer. You could opt for any of these thermometers (15).

Your child’s doctor would ask about the symptoms observed and conduct a physical examination. They may also perform a few blood tests and take a urine sample to check for urinary tract infections.

Treatment For Low-Grade Fever In Children

If the low-grade fever is caused by a viral infection, taking proper rest, drinking plenty of fluids, and having a lukewarm bath are often advised. You could also give them an anti-fever pill, such as acetaminophen or ibuprofen. Children under 17 years should not be given Aspirin as it may cause Reye’s syndrome (16) (17).

Based on the type and severity of the infection, your pediatrician may suggest some additional interventions such as antibiotics or antiviral drugs.

Antibiotics and increased fluid intake are often suggested for UTI. If the underlying cause is chronic, the treatment would include extensive medical interventions.

A low-grade fever in children usually indicates that their immune system is trying to fight off a foreign invader. Most low-grade fevers are not a cause for concern. However, if it is accompanied by other symptoms or lasts for more than three days, seek medical advice.