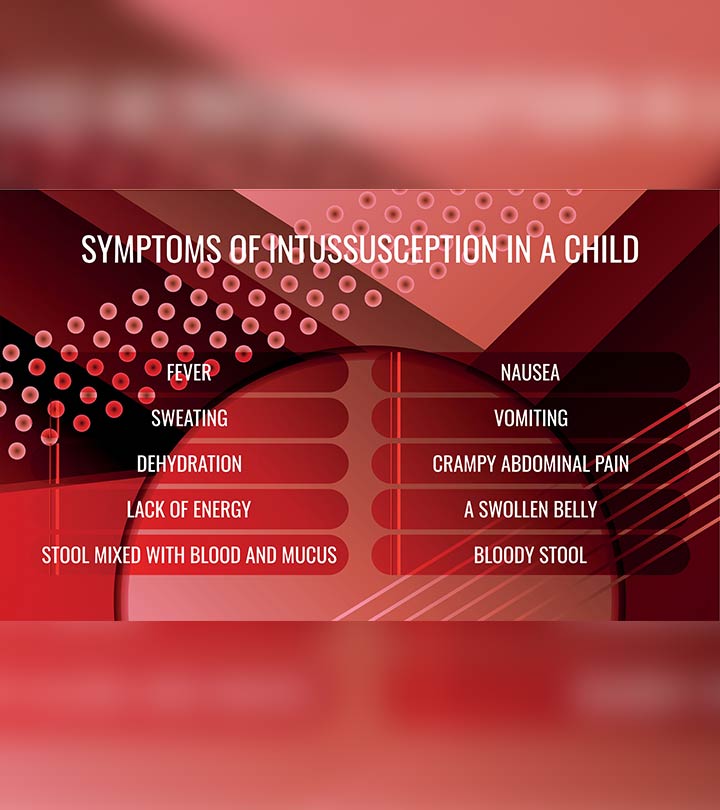 Intussusception is a condition in which one part of the intestine slides or telescopes inside the other part. This may occur anywhere in the gastrointestinal tract. However, the junction between small and large intestines (ileocecal junction) often has a higher risk of telescoping than other segments.

Intussusception can cause intestinal blockage (obstruction) in babies. This may also reduce blood flow in the affected intestinal segment, leading to necrosis and infection of the bowel tissue. In addition, babies can also develop severe dehydration.

Read this post to know about the causes, symptoms, complications, treatment, and prognosis of intussusception in babies.

Signs And Symptoms Of Intussusception In Babies

Sudden severe abdominal pain (belly pain) can cause a baby to cry loudly during intussusception. This can be like colic for the first time, but the pain becomes frequent gradually. Babies may bend their knees, act irritable, or cry due to pain. Other symptoms and signs of intussusception may include (1):

Babies may pass a normal stool after a pain episode. But, the next stool may have a blood or red, jelly-like appearance (2). Symptoms of intussusception may vary in each baby and often look like other medical conditions. Therefore, it is recommended to seek immediate medical care if your baby has symptoms and signs of intussusception.

Risk Factors And Causes Of Intussusception

The exact cause of intussusception is not known. According to the Children’s Hospital of Philadelphia, boys develop intussusception four times more than girls, and 80% of cases occur in babies younger than two years old. However, it is rare in newborns. The following factors are believed to be responsible for intussusception in some babies (3).

Most babies with intussusception may not have any of these conditions. A genetic basis of intussusception is suggested based on the anatomical factors in cases of idiopathic intussusception (unknown cause) in some families (4). However, acquired agents, such as viral infections, could also occur in families.

Complications Of Intussusception In Babies

Never ignore or give pain medications to infants and children complaining of sudden, severe abdominal pain. This may mask the pain and delay medical care, complicating into an emergency eventually.

Health history, including details of symptoms and physical examination, can help a pediatrician suspect intussusception in babies. The following imaging tests are done to visualize the abdominal organisms and intestines (1) (6).

In some babies, the intussusception fixes itself during a barium enema. This may occur due to the pressure on the intestine while barium is introduced into the intestines.

Treatment For Intussusception In Babies

The following treatments are given to a baby before beginning the treatment for intussusception.

After stabilizing the baby, doctors may begin the following treatments to relieve the telescoped intestines.

Intussusception surgery is indicated if the intestines are not back to normal after an air enema or if the baby is not well enough to undergo these procedures (8). Abdominal incisions under general anesthesia help the surgeon access the intestine and push them back in place.

If there is damage in the intestine, the doctor may remove this part and join healthy parts.

In cases of severe intestinal damage, surgeons may create an enterostomy that diverts the small intestine to the artificial opening in the abdominal wall to continue the digestive process. In such cases, the stool will pass through the stoma (opening) to the collection bag for some time. The intestines are joined later when acute problems are resolved.

Intussusception can be life-threatening if not treated on time. However, most babies receiving treatment within 24 hours may recover completely. The prognosis may vary depending on the extent of damage in the intestines. Only 10% of babies have a recurrence of the condition (8).

Babies with significant intestinal damage and large resection (surgical removal) may have long-term issues. Removal of large segments of the intestines can interfere with fluid and nutrient absorption and often require long-term supplementation with intravenous nutrients and high-calorie solutions.

Intussusception can be treated with an enema in most cases. Early treatment can prevent complications. Seek emergency medical care if your baby has any symptoms of intussusception. It can help in timely diagnosis and treatment, improving the long-term outcomes for the baby.

This mom shared the hilarious reasons her toddler melted down

30+ Shows Like Stranger Things That Are Weird And Wonderful

Huggy Wuggy: What parents need to know about the disturbing

Artificial feeding of your newborn baby: Tips for new parents

AAP recommends University of Kentucky HDI resources for families of

cool things to do at home pt 2