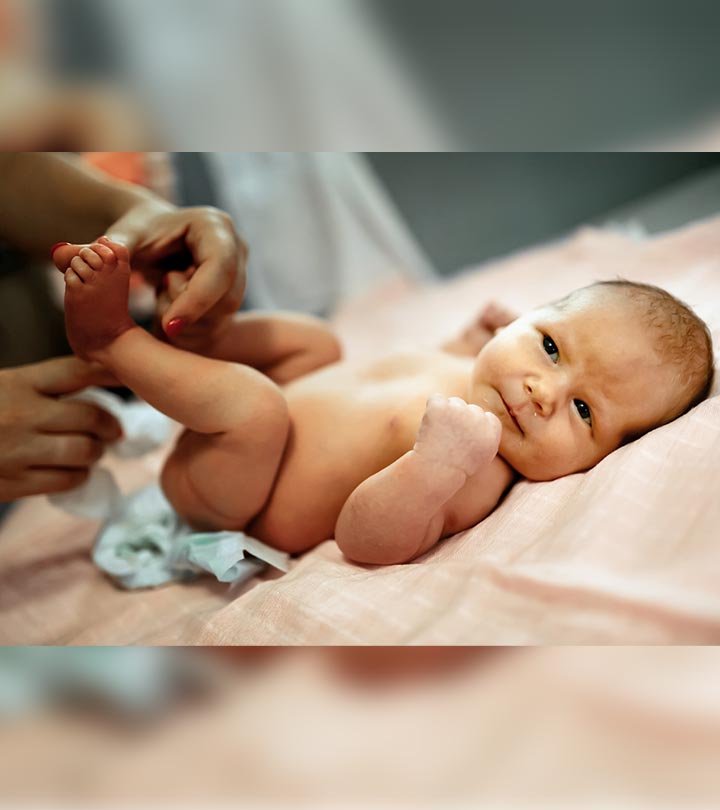 Brick-red, pinkish stains in your newborn’s diaper may appear like bloody urine, but it is mostly due to urate crystals. Urate is a salt formed by uric acid, a weak organic acid produced in the body during the metabolism of certain endogenous products in the body(1). Urate crystals in the urine are often indicated by reddish, orange, or pinkish residue, almost appearing like red brick dust in the diaper.

What Causes Urate Crystals In An Infant’s Diaper?

A baby may excrete urate crystals due to the high concentration of uric acid in the blood. Uric acid is a waste product synthesize din the liver, intestines, and certain cells of the circulatory system when the body breaks down purines (2)(3). Purines are compounds formed during the natural processing of food compounds and compounds released due to natural cell death(4).

Uric acid enters the blood and reaches the kidneys. The kidneys filter uric acid, which dissolves with other compounds found in urine to form uric acid salts called urates. Excess uric acid leads to more urate formation. The excess urate is excreted through urine and visible as urate crystals in the baby’s diapers.

The following conditions and scenarios could lead to excess uric acid concentration (hyperuricemia) in the blood, leading to urate crystals in the baby’s diapers.

Breast milk is the only food for a newborn for the first six months of their lives. Babies get all their nutrition and fluids from breast milk. Inadequate ingestion of breast milk could increase the risk of dehydration, which may concentrate the urine, increasing the risk of urate crystals in the urine (5).

Breastfeeding issues, such as inadequate breast milk supply, are usually a leading reason for dehydration among babies. However, a baby may become dehydrated for several other reasons, such as vomiting due to illness and even prolonged nursing strikes. You may read more about the causes of dehydration in babies here.

Kidney diseases, such as chronic kidney disease (CKD), could affect the kidneys’ functions, making them less efficient at filtering blood. It could lead to the accumulation of urate crystals in the kidneys, causing kidney stones (6). Urate crystals from the kidneys may reach parts of the urinary tract and also pass through the urine.

Several types of kidney diseases exist, and babies may usually experience congenital kidney problems, such as those due to genetic disorders (7).CKD is usually the most common risk factor for hyperuricemia, excess uric acid in the blood, increasing the risk of urate crystals in baby’s diapers(8).

3. Underlying problems and other factors

Several other problems and conditions may lead to excess uric acid in blood and urate crystals in the urine. These conditions may usually be rare in infants(9).

How Long Do Urate Crystals Last In Babies?

Studies suggest that about 22% of newborns show urate crystals in their diapers for the first one week of their life (10). Urate crystals in newborns usually resolve in days as the breast milk supply stabilizes and the baby feeds well.

If your baby has reddish residue of urate crystals in their diapers for more than a week, consult a doctor. You must also see a doctor if your baby is unwell or was diagnosed with a congenital problem at birth.

What Foods Can Cause Urate Crystals?

Uric acid is also produced due to the breakdown of purines found in food items (3). Urate crystals due to intake of excess purine-rich food items are not seen in babies younger than six months since they are exclusively breastfed.

The intake of excess purine-rich food items by babies older than six months may increase the risk of urate crystals. The following are food items with high purine content (11)(12).

The occasional overeating of these foods seldom causes urate crystals in healthy babies. Urate crystals due to a high purine diet may occur if the baby’s solid food diet is consistently imbalanced for several weeks to months, causing other problems, such as malnutrition, as well.

Infants with existing kidney or liver problems and genetic disorders may be more likely to develop urate crystals due to purine-rich foods. An example is the Lesch-Nyhan syndrome, a rare genetic disorder that causes deficiency of an enzyme vital for processing purine. The absence of the enzyme affects the body’s biochemical pathways for processing purine. It leads to excess uric acid in the blood and increased chances of urate crystals due to a high purine diet(13).

How To Prevent Urate Crystals In Newborns?

Urate crystals during the first week of life are normal and seldom a cause for concern. Nevertheless, the following measures may help reduce the risk of the baby excreting urate crystals.

Finding urate crystals is quite common in baby diapers, especially in the first few days after birth. Most cases are benign and resolve within a week. If urate crystals persist beyond a week or your baby has other problems, discuss the treatment and management of that condition with the doctor. Ensuring adequate hydration through breastfeeding and a balanced diet could reduce the risk of urate crystals in most babies.

MomJunction’s health articles are written after analyzing various scientific reports and assertions from expert authors and institutions. Our references (citations) consist of resources established by authorities in their respective fields. You can learn more about the authenticity of the information we present in our editorial policy.